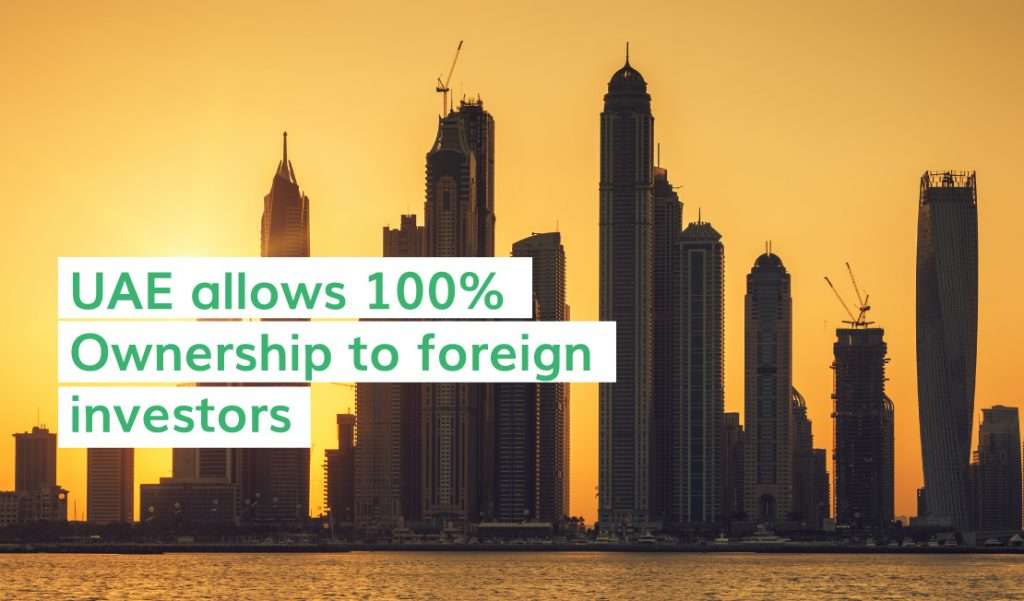 Complete business ownership for foreigners planning to start a business on UAE mainland has been a much talked about topic in the last many months. The UAE has finally passed the FDI law, which allows 100 % ownership to foreigners and this will come into effect from December 1st. The official announcement was made by His Highness Sheikh Khalifa bin Zayed Al Nahyan.

As per the existing law, foreign investors were not allowed to have 100% ownership of any business on mainland and required the assistance of a local sponsor who holds a minimum of 51% of the share. The FDI law amends 51 articles and added a few, most of which focuses on establishing provisions for the companies with limited liability shareholding.

His Highness Sheikh Mohammed bin Rashid Al Maktoum, Vice-President and Prime Minister of the UAE and the Ruler of Dubai, was of the opinion that, UAE now enjoys a fertile legislative environment for foreign direct investments which in turn will enhance the competitiveness of the nation.

The existing Commercial Companies Law or the CCL Law No.2 of 2015 requires the presence of a local sponsor who owns 51% of an organization’s share and the foreign investors were only allowed to have a maximum of 49% shareholding to run a company in UAE mainland. The sponsor had to be a UAE national or a 100% Emirati Company.

According to the FDI law that is being passed, expatriates are allowed to have a 100% ownership of businesses, except for those that are excluded by the Cabinet’s decision or those that are fully owned by the federal or local governments or their subsidiaries.

This is a most awaited law and as the laws for foreign investments has undergone many amendments recently, it is sure to bring in more investment options to the country. The investors will be provided with wide opportunities and can get used to the lifestyle here. UAE has been focusing more on implementing new ideas to make it the most suitable place for foreign investments.